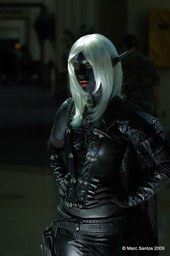 It is impossible to know now with any certainty what happened in the younger years of her life. There are records of her claiming to have been watched over by the daughters of Babu Jaga (Baba Yaga in the common tongue). Indeed she was an accomplished wizard and often visited with one of the Witch Queen’s displaced daughters of whom I’m an acquaintance, so that may be true, to a degree.
She also spoke of being raised among the tribes of north men as both a prisoner and adopted daughter – wandering from one tribe to another across the icy wastes. It is out of the cold north that most of her tales start. There are very little records of her time in Absolam except that she was difficult and often refused to do the menial tasks appointed to the younger classmates. Reviewing the few comments made by her instructors I found only one of note:

“…not lazy – just filled with a tight economy of motion.”

She kept herself hidden while at Absalom but this really didn’t cause as much of a stir as it did in other places since there are already a wide set of idiosyncrasies among the Pathfinders. Out in the world she found it difficult but always felt it was necessary. I discovered later in my researching that she didn’t have this odd fetish during her time in the north. I now believe the cloaks and masks started when she decided to leave that area and are tied to the reasons why she made her way south.

Her face was hidden as the truth about her background – for more reasons then just her accursed race.

-From: “Edge of the Map: A look at the people and personalities behind the Pathfinders. Chapter IV: Pandora Eilserv by Ellie Konstantinov”