Review: A Score of Trapped Chests 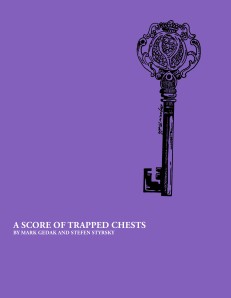 Entering among the stable of excellent variety of supplemental tools available for prospective GMs, Purple Duck Games has put together a rather curious offering here–with a focus specifically on interestingly presented trapped chests for spicing things up in a given game.  But to simply regard this collection as ‘merely’ twenty new traps would do a disservice to the creative contraptions herein, so let’s take a look at just what one can find when opening this suspicious trunk!

As stated, there are twenty trapped ‘chests’, but the entries are much more than this; each is presented first with a catchy tag-line that summarizes what to expect, followed by a nicely written description of the chest in question, how it might be used and how its mechanism operates.  Alongside the operation of these mechanisms, many go into detail about what disarming them actually entails–nice added flavor beyond a target number and a disable device roll.

Right off the bat, these entries are rife with flavor–and the tag lines serve very nicely when thumbing through the pages pondering what you might wish to implement; as well, many of the mechanisms include additional tidbits e.g. abilities which might help identify a particular trap, or circumstances in which they might not be sprung.

Here is a breakdown of our twenty selections:

-‘Fiery Destruction’ is a small secure container for important documents and the like rigged to destroy its contents to ensure they don’t fall into the wrong hands or end up before prying eyes; simple, straightforward, and quite cool–especially handy for an espionage-friendly or urban sort of adventure!

-‘Red-Handed’ is just the sort of thing you might expect to find employed by a successful merchant seeking to secure their wares; quite simply, it works just as you’d expect from its moniker–rendering a prospective thief quite literally red-handed such that the culprit may be identified.  Nice!

-‘Scent Trap’ may draw a wince or two, utilizing its mechanism to spray would-be burglars with rather foul materials.  The remnants of such would make tracking via scent considerably easier.  As an added bonus, one might consider utilizing the trap here in a variety of other circumstances–or even as the crux of a practical joke.

-‘Empty’ is so simple it’s a wonder it isn’t a standard staple in core content; an illusion makes the chest in question appear empty.  What more need be said?

-‘Shoplifter’s Peril’ is one of my favorites, featuring one of the especially cool extra perks of this product: the minimimic, a tiny new creature which tries to form friendly relationships with humanoids rather than hostilities.  In this case, the minimimic poses as merchandise and remains hidden when handled by prospective customers–only acting when someone attempts to steal them away.  Not only is this exceedingly neat critter presented with a full stat block–but also included are potential mutations and even some nice full color art.  Awesome!

-‘Chest That Knocks You Out’ fires toppling magic missiles in the form of screaming minotaur heads, barreling over nearby targets; the visual image of this alone should be enough to sell someone on employing one of these chests in an adventure!

-‘Spray of Acid’ is pretty self-explanatory, albeit with the interesting twitch that its trigger condition is actually sound rather than an attempt to open the chest; as such, this could certainly be retrofitted as a regular trap quite easily–making adventurers quite wary and leery of statuesque heads in the future.

-‘Wizard’s Bane’ presents a new poison called ‘Mind Hammer’ which deals intellect damage; the chest serves as a vehicle to demonstrate it, but like Electrified Chest it’s a nice little bonus to have along for the bundle.

-‘A Small Problem’ targets whomever triggers it with a greater version of Reduce Person, attempting to render them diminutive–before loosing a ‘heat swarm’ upon them; that’s when things get really entertaining, because the resultant pairing turns into a separate fight with the equivalent of a bunch of medium fire elementals.  Very stylish!  Both Greater Reduce Person and the Heat Swarm are included as a new bonus spell and creature respectively.

-‘Chest of Wolves’ is another simple yet very entertaining offering, for once it’s opened a small pack of wolves is summoned to assail whomever trigger it.

-‘Ooze!’ is not a trap in the traditional mechanical sense, but is nevertheless a ‘trapped chest’ for contained within is a slithering tracker, waiting to be freed.  Once the chest is opened, the tracker lies in wait–before beginning to track whomever let it loose thereafter.

-‘Silent Death in the Dark’ looses an iron cobra on unsuspecting burglars–but what makes it truly menacing is it emerges with darkness and silence already cast on it.  Ouch!

-‘Poison Gas Urn’ would be right at home in any desert tomb, with pressurized ungol dust loosed in the air once opened.  Straightforward, but full of flavor (and terrible poison gas!)

-‘Memory Thief Chest’ is a combination of a fireball and a modify memory which, when coupled together, leave those in the vicinity hurt and not remembering why.  Bizarre, but entertaining–though using it with player characters could be tricky.

-‘Body in Green Glass Chest’ appears to be a coffin wrought of green glass with an aasimar cavalier interred within; once triggered, the trap attempts to trap the soul of the individual who triggered it (per the spell) which loosing the cavalier to do battle–for the body becomes filled with an evil soul in turn.  Potentially a fairly nasty combination, but very neat!

-‘The Terrible Thing in the Box’ conjures up a terrifying visage for all present when it is triggered, potentially reaping very deadly consequences; this is one is weird, literally!

-‘The Button’ may remind you of a certain story or film, sporting a large red button set beside the locking mechanism of a chest.  When pressed, someone nearby other than the individual who pressed the button becomes the target of a finger of death.  Ouch!

-‘Chest to the Abyss’ is a double-whammy trap which wheels out a Vrock alongside two Glabrezu demons bound to make someone’s day go south very quickly; the latter pair attempt to abscond with a character after stuffing them into the chest itself.

Finally, at the very end we’re presented with The Duckaxe, a legendary weapon with a treatment like those found in Purple Duck Games’ line of legendary goodies supplements.  The Duckaxe is a battleaxe which brooks no guff from magic users and works wonders and giving them a hard time–and as an added bonus, it’s made out of a new material called noqual complete with all new mechanics for magic-resistant gear.  Awesome!

Overall:  15 pages, of which cover, credits and OGL occupy 4–leaving 11 pages absolutely crammed with cool content.  A Score of Trapped Chests adheres to the clean two-column format Purple Duck Games employs as standard and everything is crisp, clean and easy to read–with mechanical crunch readily available at a glance.  Four pieces of art are also included, two color and two black and white (with a fifth piece at the very tail end of the supplement as part of a promotion).

I’ll just come right out and say it: I -loved- this collection and was thoroughly surprised and pleased with the variety of content that Purple Duck Games has managed to squeeze into eleven pages.  Not only do you get -twenty- excellent traps to add flavor and spice up any dungeon or adventure’s treasure, but a vast majority of them could easily be utilized as traps independent of their protected stashes and each is wonderfully realized.

On top of the twenty traps, both of the two new creatures are quite cool (especially the excellent minimimic in particular) and to top -that- off you’ve got new spells, new poison and a well-done legendary weapon as well (which itself includes a brand new crafting material!)

With all of this packed together for a mere two bucks, you absolutely cannot go wrong with this product–the variety is considerable, the crunch is solid, the contents are entertaining and a prospective GM is bound to find plenty of value over any number of adventures and locales.  Definitely five stars, Mark and Stefen have done a truly awesome job!